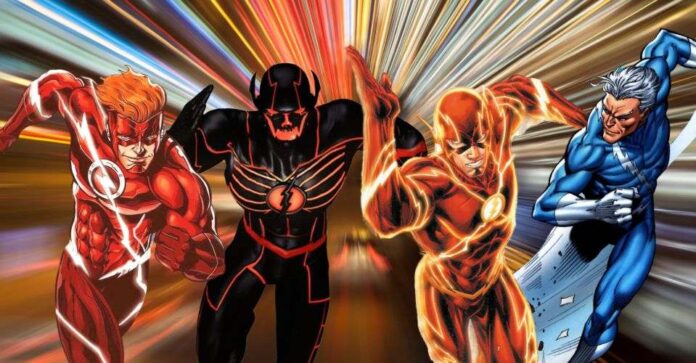 Speed is just like an addiction. Those addicted to it can’t help themselves. So the two most famous comics on planet Earth, Marvel, and DC have plenty of speedsters, but only ten of the fastest ones will feature on our list today.

Now, Marvel has fewer speedsters than DC’s. They also fail to explain the logic behind their speed, where DC gives a justification.

In a general sense, Barry Allen is the man who holds the title of ‘the Fastest Man Alive,’ but our list will break down the reasons why he isn’t.

So, we will give you a brief idea about the top 10 fastest superheroes from Marvel and Comics.

Jay Garrick was the first man to hold the title of Flash in DC Comics. Gardner Fox and Harry Lampert’s creation is the original Flash from the Golden Age. He has a better knowledge and experience of the Speed Force than other versions of Flash.

Garrick is one of the founding members of the Justice Society of America and served as the superhero society’s first chairman. But the first Flash is not the fastest. He acts as an adviser to other speedsters when they screw up Speed Force.

In the latest comic, Jay was killed by Doctor Manhattan. The most famous speedster in the comic world, Barry Allen, idealized Jay Garrick for his heroic acts as a costumed speedster and continued his legacy.

Marvel Cinematic Universe has recently introduced another speedster, Makkari, through the Eternals movie. Makkari, in the comics, was introduced as a male, but during the rebirth event, he was born as a female Eternal with superspeed.

The Olympian is often depicted as a god of speed by Earth dwellers but is not physically strong like other Eternals.

Though Makkari cannot run faster than the light, her immortality and the strength of an Eternal make her a powerful speedster.

Hunter Zolomon, aka Zoom, is the second most dangerous supervillain besides Eobard Thawne’s Reverse-Flash. Reverse Flash is pure evil and is obsessed with Barry, while Zoom leans onto Wally West.

Hunter was one of Wally’s closest friends before becoming his greatest enemy. Their friendship became bitter after Wally refused to undo his paralysis with the Cosmic Treadmill’s help to maintain the timestream. So, Hunter risked his own life by attempting the cosmic treadmill himself.

This resulted in an explosion that granted him the ability to alter his timeframe. Hunter Zolomon’s version of Zoom is not a supervillain but an anti-hero.

In the comics, it is also hinted that Zoom is faster than Barry, and he was able to beat Wally by trickery. Yes, It may be time that helps him rather than speed, but he is still one of the toughest speedsters ever.

Marvel’s most famous speedster is, without a doubt, Pietro Maximoff, aka Quicksilver. Quicksilver’s origin story was rewritten several times in the comics. But he is best known as the twin child of the mutant supervillain Magento.

As a founding member of the Brotherhood of Evil Mutants, Pietro is represented as an anti-hero alongside his sister, Wanda Maximoff, after joining the Avengers.

Both Marvel and Fox introduced this speedster on screen, but Fox’s version gained more fans thanks to the iconic jail-break scene. In the comics, it is hinted at several times that Pietro has not achieved his full potential yet.

But this guy doesn’t even come close to DC’s Flash, even with his Isotope E.

Godspeed has no trait of a god but rather is a speedster killer. August Heart was a good friend of Barry and joined the CCPD to avenge his brother’s murder.

On a fateful day, a Speed Force storm hit Central City, and many citizens, including August, gained superspeed unexpectedly.

Without Barry’s knowledge, August started killing other new speedsters and absorbed the Speed Force from them. He took the mantle of Godspeed with a twisted moral sense. Barry began to suspect his selfless friend after discovering the deceased body of August’s brother.

The main thing that makes Godspeed so powerful is his ability to sense Speed Force in others and suck up their powers. This whole process makes him faster with each kill. But Barry Allen and Wally West defeated Godspeed.

Norrin Radd, aka Silver Surfer, is the fastest superhero in the Marvel Universe and the mightiest member of the herald of Galactus. His purpose was to find suitable planets for his master, Galactus, so that he could feed on them.

Norrin Radd sacrificed his life to the Devourer of Planets so he could save his planet, Zenn La. Unfortunately, He lost all his memories when Galactus transformed him into the Silver Surfer.

After serving for a long time, he rebelled against Galactus when his master was determined to end planet Earth. He stayed on Earth for some time and teamed up with different superheroes to fight against several super villains.

Being a herald of Galactus, his surfboard can move faster than light, and he has vast access to power Cosmic courtesy of Galactus. His abilities also allow him to travel between dimensions and can do time travel as well. So, he is the fastest speedster whose all abilities are fully explored in Marvel Comics.

Publisher: DC Comics
First Appearance: The New Gods #3 in 1971
Top Speed: Unknown but can travel faster than the speed of light

Black Racer, the Grim Reaper of the DC Universe, is a member of the New Gods. The sole duty of Black Racer as a physical manifestation of Death is to collect the souls of fallen gods from the battlefield, and none can escape from his grip.

Though he received different back stories on several occasions, Willie Walker became the mortal incarnation of this New God in the comics. With his pair of comic skis, Black Racer is the fastest New God in DC Comics history. But his true power is the death touch, which can even kill a god.

As the embodiment of Death, this New God is the deadliest speedster and is also connected to the speed force. Despite being so powerful, the Flash is faster than him, which doesn’t make sense.

The Runner, also a member of the Elder of the Universe, is one of the lesser-known beings in the Marvel Universe. His infinite speed cannot be measured as he is one of the cosmic beings who lived on for centuries.

Most of his origin story is still unknown as his appearance is very limited in the comics. Gilpetperdon is the last survivor of his race after the Big Bang and absorbed the primordial power, which granted him immense cosmic abilities. That is how he became The Runner and joined the other pre-Big Bang era’s celestial beings team, Elders of the Universe.

The Runner loves to explore the unknown places of the universe through his free running and cosmic awareness.

Yes, This guy is a very selfish cosmic being like his fellow elders, as he tried to kill Galactus and Silver Surfer for his gain. Despite all this, there is no rival against this speedster’s pace and strength in Marvel Comics.

The only reason we ranked him here is because of the lack of feats, and he relies heavily on the space gem.

Barry Allen has the title of “The Fastest Man Alive” in DC Comics, but he is not. Even though Barry is a known name, The CW’s long-running Flash TV series has helped Barry to get more recognition.

Barry Allen is one of the founding members of the Justice League and is the second person to hold the title of ‘The Flash’ next to Jay Garrick. Barry received his superpowers accidentally when he came in contact with an unknown material in a lab accident, just like his predecessor, Jay.

The fascinating thing about the Flash is that he produces Speed Force, unlike other DC speedsters. Flash in comics is notorious for manipulating timelines as he created Flashpoint to save his mother and almost destroyed the entire DC Universe.

Flash can do time travel, and Ezra Miller’s mind-blowing time travel scene in the Justice League Snyder cut has recently won the Oscars Fan Favorite award. This shows how popular Barry Allen’s Flash has become in recent years outside the Arrowverse.

Wally West’s Flash is not far behind in popularity besides Barry Allen. Unlike Batman and Robin, Wally, as a sidekick, was able to outrun his mentor, Barry, and he holds the title of the Fastest Man Alive. Also, Wally is the third person to take over the mantle of the Flash in DC Comics.

He started his superhero career as Kid Flash and later became the Flash after the death of Barry Allen. This speedster became the first one to enter the Speed Force and returned, becoming more robust than before.

The nephew of Iris, Wally, also received his superpowers at the age of twelve like Barry. In DC’s early 2000s animated series of Justice League, Wally was shown as the founding member of the Justice League instead of Barry.

Someone who is the speed force himself has the ability of speed drain, and has successfully managed to save 500,000 people in under 0.001 microseconds has got to be on top of the list.

As we reach the end of our countdown, we believe you have enough knowledge of the ten fastest superheroes from Marvel and DC Comics.

Yes, We ignored some superheroes with the ability to teleport, fly or swim as they do not fulfill the criteria. When we talk about ranking, some characters receive more speed or superpowers from the creators for story purposes, and this may seem unfair, but we can only talk about the things that have already happened.

Barry Allen was once the fastest superhero in the history of comics. But he is not the holder of that title anymore. And with the evolution of comics and their characters, their rankings also change. Also, Read about the most powerful characters in all of DC Comics, and Marvel Comics.