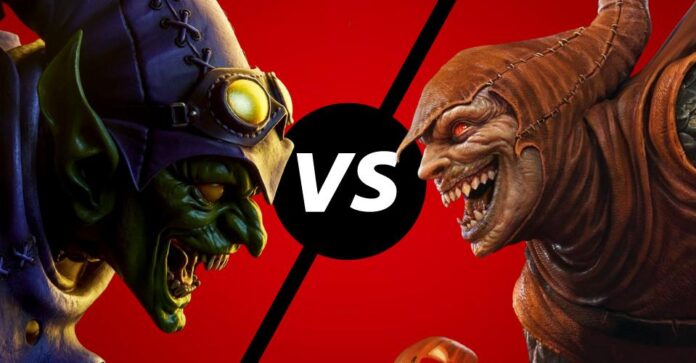 Thanks to the live-action portrayal, Many fans are familiar with Green Goblin but only a handful really know about Hobgoblin. Even though both Hobgoblin and Green Goblin are Spider-Man villains, these two are very different from each other.

If you are interested in knowing everything there is to Hobgoblin, and Green Goblin along with their powers and differences then keep reading.

So, Without any further ado, Let’s dive right in.

Note: We are solely talking about the original Green Goblin, and Hobgoblin here as there are many different versions of these characters in the comics.

To really know about Osborn we need to learn about his childhood.

Born to a failed inventor who often took his rage out on young Norman, The kid was always obsessed with money.

Setting his father as an example, He worked hard to build an empire to fund him financially.

With knowledge of chemistry, electrical engineering, and business administration, Norman along with his Professor Mendel Stromm founded Osborn Chemical aka Oscorp.

Right when he was about to go bankrupt, Mephisto appeared as a business investor with a reality-bending deal.

Though Norman initially refused to have a part in it. He later took on the agreement of exchanging Harry’s soul for a wealthy life.

As expected, Mephisto held on to his end of the deal as he not only made the Norman filthy rich but also arrested his only partner making Norman Osborn the CEO of Oscorp.

Bonus: Do you know that the scar on Norman’s face was actually caused by Harry?

With the superhuman strength and unending money at his side, Norman took a wrong turn in his life.

He decided to become the ultimate crime lord uniting all gangs in New York. To gain a reputation, He then decided to make Spider-Man his target.

As a kid, Norman had nightmares of a green goblin monster. He used this to make his secret identity and became the chaotic “Green Goblin.”

After this Norman fought Spider-Man several times and that would be a story for another day.

Here’s every organization Green Goblin joined or took initiative in the comics.

Here are all the Green Goblin villains whom he fought at least once.

With Green Goblin’s brief history out, Let’s see who Hobgoblin actually is.

As a common fashion designer, Roderick Kingsley was also obsessed with money.

He was so jealous that this guy once attacked Narda Ravanna, His rival in fashion designing but was stopped by Spider-Man.

This should give you a measure of Roderick’s mental state.

Now without boring you to death, Let’s quickly get into how a fashion designer from New York became Hobgoblin.

With the sole objective of destroying his competition in the industry, Roderick found Green Hill, A bank robber who discovered Norman Osborn’s hideouts.

Feeling physically weak to pin his targets, Roderick employed Hill, and transferred all the gadgets of Green Goblin to his mansion.

Though he later killed Hill by setting up a bomb in his van, Roderick didn’t stop there.

He sought out the Green Goblin serum used by Norman Osborn to gain superhuman abilities.

Believe me, this guy is no fool, As he knew this serum would have side effects and wanted to test it on a subject.

Roderick injected Arnold with an improved serum and black-mailed him to fight Spider-Man.

After seeing his encounter with Peter Parker, Roderick terminated Arnold and improved the serum even further so that it has all the Green Goblin abilities with his weaknesses stripped off.

Thus, We have the birth of a new villain in New York in the form of Hobgoblin.

With the all-new improved serum, Roderick claimed that it gave him strength equal to Spider-Man’s surpassing Green Goblin.

Fun Fact: Roderick Kingsley was so clever that he consistently outsmarted both Green Goblin, and Kingpin who is believed to be one of the best masterminds behind all the chaos in New York.

Now, We know who really Hobgoblin and Green Goblin are. With that out of the way, Let’s see their similarities and differences.

Similarities Between Hobgoblin And Green Goblin

We all knew Green Goblin, and his copy Hobgoblin is Spider-Man villains but they have other things in common.

Starting with the unending wealth they built, These two men are self-made, and both used Green Goblin serum to gain superhuman abilities.

Both Green Goblin, and Hobgoblin had similar outfits, weapons, and gadgets as Roderick Kingsley’s whole supervillain thing is based on Norman Osborn but more importantly, These two have successors who took on the role.

Though we are talking about the original ones, It should be noted that there are several versions of Green Goblin and Hobgoblin in the comics.

Difference Between Hobgoblin And Green Goblin

Exactly 19 years after Green Goblin was introduced, Marvel writers took on Hobgoblin with the idea to create a new Green Goblin different from the original one.

As a fashion designer himself, Hobgoblin took on the costume of Green Goblin and improved it a lot.

He ditched the green theme and went with an orange outfit paired with a cloak, and red eyes which provided him an even more sinister look than Norman Osborn.

If you point out the one thing that sets Green Goblin, and Hobgoblin apart is Norman Osborn’s mental instability. While both used the Green Goblin serum, Hobgoblin improved it nullifying the side effects.

Another difference between Green Goblin, and Hobgoblin is that every version of these supervillains is identical to the original ones.

All Green Goblin successors have mental issues but the people who took on the mantle of Hobgoblin are sane and calculated.

Norman Osborn aka Green Goblin was driven with the sole purpose of defeating Spider-Man, causing damage to the superhero but Roderick Kingsley aka Hobgoblin’s goal is to become the strongest.

But do you actually know which Spider-Man villain amongst these two is the strongest?

Hobgoblin vs Green Goblin, Who Is More Powerful?

So, Which Spider-Man antagonist wins if we pit them against each other?

If you are wondering how strong is Green Goblin, then with the Goblin serum at his disposal, Norman can lift up to 9 tons without breaking a sweat.

On the other end, Hobgoblin has similar if not more strength than Green Goblin thanks to his improved serum which translates to over 12 tons.

In the comics, Roderick Kingsley claimed that his version of Green Goblin serum gave him the strength that can rival Spider-Man himself which means he can easily overpower Green Goblin.

In “Spectacular Spider-Man Vol 1 #261,” Green Goblin, and Hobgoblin finally faced each other.

Even Norman Osborn was surprised at how strong Roderick Kingsley was and admitted that Hobgoblin’s strength surpassed his own.

Unlike Green Goblin, Hobgoblin is able to keep his identity a secret for a long period.

Nearly after 14 years after his first appearance, Hobgoblin’s identity was finally revealed in the 1997 miniseries “Hobgoblin Lives.”

This means that Hobgoblin actually uses his brain instead of depending on instinct alone.

Yes, Norman Osborn’s Green Goblin is insane and much more experienced than Roderick Kingsley’s Hobgoblin but with the enhanced serum, modern gadgets, and a calculated mind, Hobgoblin wins if he fights Green Goblin.

Are Green Goblin and Hobgoblin related?

No, Green Goblin and Hobgoblin are completely different characters. Though Roderick Kingsley aka Hobgoblin used the gadgets and goblin serum of Norman Osborn aka Green Goblin, These two are different men with contrasting objectives.

While Green Goblin’s sole purpose is the defeat Spider-Man and cause him pain, Hobgoblin was more of a power-hungry guy.

Who is more powerful Hobgoblin or Green Goblin?

Though both Green Goblin and Hobgoblin injected the goblin serum, Roderick Kingsley improved it by nullifying its drawbacks. In the Spectacular Spider-Man Vol 1 #261, When these two supervillains faced off against each other, Green Goblin admitted that Hobgoblin’s strength surpasses his own. This makes Hobgoblin more powerful than Green Goblin.

In the comics, Green Goblin can lift up to 9 tons, whereas Hobgoblin’s strength can rival that of Spider-Man’s which means he can lift up to 12 tons. Add to that, Roderick Kingsley is a calculated man, unlike Norman Osborn who is just insane. So, Hobgoblin can definitely beat Green Goblin if they ever fight.

What’s the difference between a Green Goblin and Hobgoblin?

Both Green Goblin and Hobgoblin injected themselves with the Goblin serum but one major difference between them is the state of mind. While Green Goblin has split personalities coupled with insanity, Hobgoblin is a calculated businessman who strives for power.

Who is the strongest Goblin in Spider-Man/Marvel?

Red Goblin from Marvel Comics is by far the strongest goblin ever. Apart from the Green Goblin serum, Norman got his hands on the symbiote Carnage which turned him into the Red Goblin in Amazing Spider-Man #798.

Why does Ned become Hobgoblin?

This is a major misconception for the non-comic readers but in the reality, Ned Leeds doesn’t become the Hobgoblin instead Roderick Kingsley brainwashed him into believing that Ned is the supervillain.

In the comics, Kingsley hid his secret identity by brainwashing his victims. Thus, Roderick Kingsley managed to be in the shade for over 14 years after his first appearance in The Amazing Spider-Man #238 (1983).

Does the Hobgoblin have super strength?

Similar to Green Goblin, Hobgoblin has superhuman strength. Thanks to his new and improved serum, All the previous abilities are enhanced with no drawbacks whatsoever.

In fact, Hobgoblin’s strength rivals that of our friendly neighborhood Spider-Man as he can lift almost 12 tons with ease.

With that, We have completed everything there is to Green Goblin and Hobgoblin.

What do you think about these two Spider-Man villains? Do you root for Green Goblin or his counterpart, Hobgoblin if these two fight?

More importantly, Did you find the information you are looking for?

We have more versus battles for you, Check them out if you are interested.

Moon Knight vs Batman: Who Wins In A Fight To The Death?

For more versus battles, Email us at [email protected] or DM on our Instagram page here. 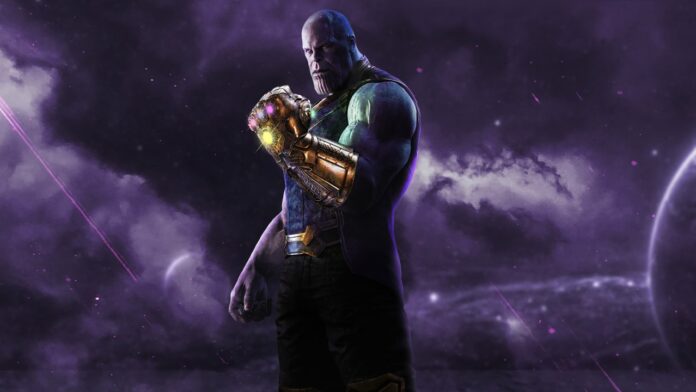 11 Most Powerful Fictional Characters Of All Time (Ranked)
Next article 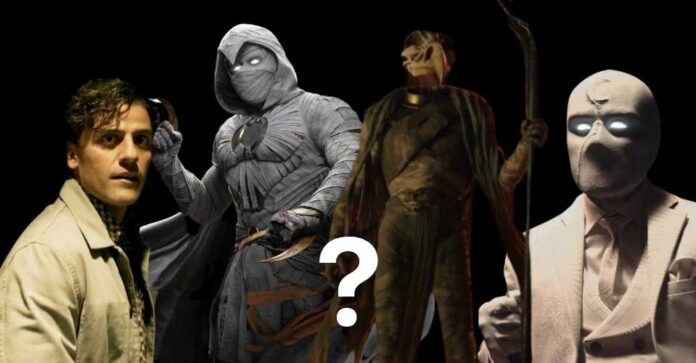