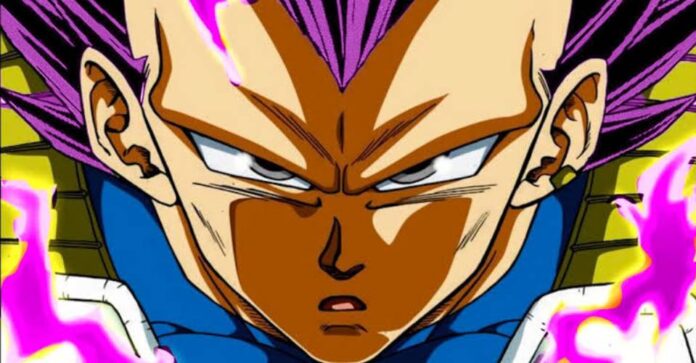 Granolah is the opponent, but Vegeta has a new power. This means that fans were asking questions about Vegeta’s appearance, so it is worth taking a look at this translation.

Dragon Ball Super released a new chapter this week for those who were confused by the whole ordeal.

It shows Vegeta’s new power where the Saiyan fights relentlessly against Granolah, despite the damage he takes.

According to Vegeta, This is Ultra Ego’s power. The name is meant to reflect Goku’s new form.

Fandom translator Herms98 posted the entire thing on Twitter. The English name Vegeta was chosen to reflect Goku’s Ultra Instinct was Ultra Ego, however, is not a translation.

“So yeah, looks like the official English name for Vegeta’s Wo Jin noJi Yi /Waga-mama no Goku’i is ‘Ultra Ego’.

This translation translates Wo Jin/Waga-mama into “ego” and adds “ultra” in order to match Ultra Instinct. It’s a loose translation of the Japanese name”, Herms98 writes.

Back to Ultra Ego. Where did the “ultra” word in UI or UE come from? It might not be added just to sound cool.

Although the translation was taken in creative ways, it still mirrors Vegeta as well as Goku.

The Saiyans are always mirrored opposites. It’ll always be like Vegeta for Goku and Goku for Vegeta.

This themed naming works, even though it may not be the most accurate. This is why you can bet that if another Dragon Ball Super version is announced, it will follow the same pattern.

Vegeta God of Destruction Is Back In Dragon Ball Super

What Is Vegeta’s Ultra Ego?

Vegeta’s Ultra Ego Form is a mirror image of “The Secret of the Self-Indulgent Transformation”, This allows Vegeta to use Ultra Ego and the power of destruction to obliterate his opponents.

How Vegeta Got The Ultra Ego Form?

Ultra Ego Form is a completely different and unique one that allows the user to access the power of destruction. Vegeta’s Ultra Ego was unlocked in the middle of the battle heat as it requires the user’s mind to focus on destruction and nothing else.

Not to mention his intense training with Beerus, As soon as Vegeta got into this mindset, He was able to use Ultra Ego form against Granolah.

Which Is Stronger Ultra Instinct or Ultra Ego?

This clearly shows that Ultra Ego is much more superior to Ultra Instinct.

What is Vegeta’s Most Powerful Form?

Vegeta’s most powerful form is the “Ultra Ego”. The Saiyan Prince has trained with Beerus and obtained the power of destruction from the gods.

Here’s how Vegeta’s forms are ranked according to their power levels.

Do you like the new Vegeta Ultra Ego form? What do you think about Vegeta’s new shape?

If you need further more writeups on such topics feel free to dm us on our Instagram page.

Previous articleDemon Slayer Season 2: Release date, Plot, Cast, and More
Next articleRick and Morty Season 6: Everything You Need To Know

Will Anime Come Back In India? This Is What The Future Holds