Chainsaw Man has taken over Twitter with the main hashtag #Chainsawman trending beyond 500k tweets worldwide. It still is one of the top trends today and continues soaring toward the top of MyAnimeList. Shingo Yamashita did a phenomenal job directing the new opening, as it proclaimed the love that Tatsuki Fujimoto (the manga creator) has for world cinema in general.

So, Here’s a complete guide on all the references we have seen in Chainsaw Man anime theme song.

The opening kicks off with a scene that has Dante’s Divine Comedy gracing the background. This also involves Denji tugging at the wire, which turns him into a ravenous Devil Hunter.

We see Makima, Aki, Denji, and Aki walking side by side on the street clad in black suits, just like the famous Reservoir Dogs. The similarity is uncanny.

It seems that Fujimoto sensei is a big fan of Quentin Tarantino’s movies. A significant scene is mirrored against Jules (played by Samuel L Jackson) at the diner in Pulp Fiction pointed at the nervous enemy. In Chainsaw Man, good ol’ Kishibe holds the gun.

You have a moment from the celebrated Sadako vs. Kayako by Koji Shiraishi being used as the base for the frame that features the Chainsaw Man and Katana Man fighting. Two devilish creatures battle against each other to prove one’s supremacy over the other.

#5 No Country For Old Men

Galigali, aka the Violence Fiend, sits in a hotel room, much like Anton Chigurh in No Country For Old Men. Chigurh is a calculating maniac, just like Galigali, although the latter is quite polite in the manga.

#6 Once Upon a Time in Hollywood

A Once Upon a Time in Hollywood reference is also brought in that includes Denji and Aki heading toward a destination in a car.

The Big Lebowski dynamite with Denji imitates the goofy character Jesus (played by John Turturro in one of the finest films headlined by the Coen Brothers), and Aki is gearing up to bowl. Jesus had only one appearance in the movie, but it’s probably the most-watched scene in this relaxed flick.

The Angel Devil on the stairs will remind viewers of a crucial character in Jacob’s Ladder (by Adrian Lyne).

Obviously, the Texas Chainsaw Massacre homage takes the cake, which exemplifies that the MC and the Chainsaw Devil share a great bond. The original scene in the movie showcased two individuals charred beyond recognition.

The Fight Club shout-out with the Big Yellow Ball (an art piece, if I may) is also a pretty hilarious moment; FYI: the Chainsaw Man’s name is not Robert Paulson.

The Neon Genesis Evangelion vibe as Denji goes berserk is unmistakable. Shinji’s rage has gotten inside the head of the Hunter.

Well, The font of Power looks similar to the MCU blockbuster. It is possible as Fujimoto is a huge fan of Taika Waititi movies.

#15 Attack on the Killer Tomatoes

Yeah, We saved the best one for the end.

We might have even more pop culture signs, but special thanks to Demon Dog, and Myo {Aki admirer} on Twitter, We have found a bunch of them for you all.

You can watch the full opening of Chainsaw Man right now.

Take a look at the list of all the major references here in this short clip compiled by a user on Twitter.

So how do you feel about the immense amount of effort the staff has put into the show? Does Denji’s voice actor sound desperate enough as the malnourished protagonist fighting to survive amidst a wicked world? Be sincere and hit up the comments section with responses. Do revisit us for more updates on the realm of anime, manga, and comics. And don’t forget to watch the episode if you haven’t yet! 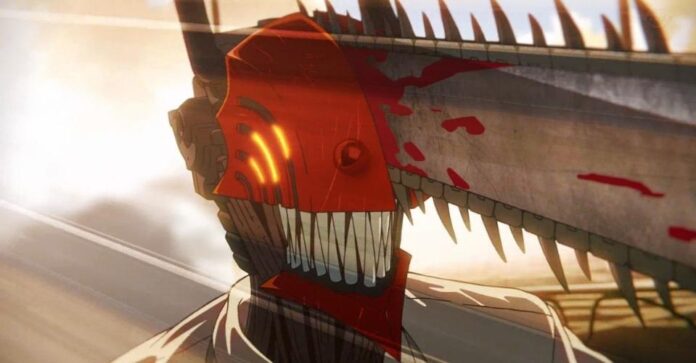