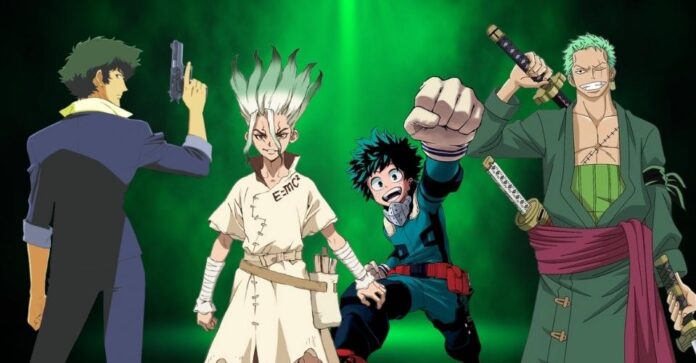 Anime has given us some of the best style statements over the years, inspiring the coolest cosplays ever. Hair is often the medium through which some character designs are given their individuality and distinctive presence.

The color palette has been explored a lot by animators and mangakas when coming up with the hairstyles we have identified a character with. In this article, the focus will be on green-haired anime guys and girls, and let’s find out who reigns supreme.

Anime: Devil is a Part-Timer

Kicking off the list, we have this devil who was once the mighty king who wanted to take over all the four continents, but as a consequence of his defeat by Hero Emilia Justina, he was banished to Earth with all his powers removed.

Satan has a short, blackish-green hairstyle with messy spikes. As the name suggests, he is full of enticing charisma, but on Earth, he is the ideal hardworking dude you’d never expect to be the devil himself.

Lubbock is the typical goofy dude who drools over women and always puts on a smiling face. He’s got long green hair that reaches his shoulder, with face-length bangs covering his left eye.

Despite his love for the opposite sex, he does not get distracted while fighting the opposite gender. Lubbock is extremely loyal to the organization he serves and has contributed much to the Night raid.

One of the major supporting characters from the series, Yushiro, can be a difficult guy to warm up to. His initial interactions with Tanjiro, whom he eventually becomes a traveling companion, reveal his arrogance. Still, we eventually see his softer side when he gets together with Tamayo, his love interest.

Envy is one of the seven metaphysical embodiments of sins, and having green hair makes the most sense, as the color is often paired with jealousy. He has long, spiky dark green, almost black hair, pushed up by a band around the forehead.

Highly manipulative Envy can take various forms and is thus portrayed as gender-neutral. He descends from pure evil and holds nothing but animosity and hatred for humankind.

Sailor Neptune is not someone you’d want to pick a fight with, as elegant as she is. Assigned to protect the Solar System from evil, she is one of the strongest Sailor Guardians with long, curly sea-green hair and a headband over her forehead.

With sophisticated charm and classy demeanor, Neptune is referred to as the ideal princess by Sailor Moon, and rightfully so. Although she does have the occasional fault of being short-tempered, that does by no means undermine her genuine intelligence and talent.

Yes, he’s a baby from inside, a mysterious man; split in half, and his father is a demon king. No big deal. Beelzebub does have a fair amount of hair for just a baby, and the green must be from the demon genes. As a spawn of the demon lord, he is attracted to evil and the macabre things that usually repel normal human babies. His cuteness, however, is not stained at all despite those oddities.

One would have mixed feelings if this lady were to become their classmate. Kaede has a short bob of sea-green hair with two pigtails. Although she seems cheerful and bubbly, subsequent events of the series might prove it to be otherwise. That being said, she still is a focused girl who knows what she wants and is determined to get them.

A masterstroke from the legendary Hayao Miyazaki, this Studio Ghibli classic has given us a timeless character who is still relevant even today. San, or the titular Princess Mononoke, is the symbolic representative of the mysterious nature, so her short green hair is allusive to the forest.

This warrior is a fierce advocate for respecting nature’s wonders; through her, Miyazaki has given many ecocritical commentaries, like many of his other works.

Don’t be fooled by his tiny stature, for this young man has a lot to offer. He’s always on the lookout for new adventures and doesn’t back down from a challenge. Gon has a boyish hairstyle with spikes of green edges.

Although young, Gon is a determined and persistent human being with a sense of honor and is incredibly confident in his skills and abilities. He had his share of darkness, which resulted in his polarizing moral judgment.

Here we have a tsundere beauty who is sure to catch your fancy, with those green curls and emerald eyes. Fans of the series would agree that she’s one of the strongest of the bunch and is a nightmare on the battlefield.

Tatsumaki might be little in appearance but is a powerhouse with a brooding attitude, a temper, and no tolerance for incompetence. Having said that, she is one of the best out there when it comes to defeating monsters.

The most eccentric hairstyle of the bunch belongs to this genius right here. Fortunately for the human race, the one to be revived after the mysterious petrification of everyone was Senku Ishigami, a child prodigy with an insane IQ who would save humanity.

With long spiked-up hair, green edges, and two strands of bangs hanging in front, Senku looks the part, like a crazy scientist archetype with his arrogance and overconfidence. This does not, however, hinder his judgments and logical sense.

This pretty tsundere boy isn’t one to be messed with. Midorima is the proud and intimidating antagonist every sports anime claims to be an absolute necessity. Like Midoriya, this guy too has a name that alludes to the color green in his character sketch.

Midorima has straight dark green hair that falls to his face, complimenting his cold eyes behind half-rimmed glasses. He is more than a worthy opponent to the titular protagonist Kuroko and, over the series, has grown into a gray character that fans can’t help but admire.

Froppy has become one of the most loved characters from the series, the cutest frog you’ll ever come across. Incredibly cute and wholesome, this young lady is a darling among the fans. Among her 1A classmates, she is a mature and level-headed person who, although she can sometimes seem reserved, is very direct and honest.

Like Midoriya, Tsuyu is also designed with a green palette, which makes total sense when we learn about her frog quirk. She has long dark green hair tied like a bow and bangs at the front, shaping her round face. Despite her kawaii appearance, she is a strong fighter with a calm demeanor that keeps her focused even in the tightest situations.

This badass lady is one of those characters that sometimes ends up stealing the spotlight from the protagonists and deservedly so. Maki has long dark green hair tied up in a high pony with short bangs shaping her face.

A descendent of one of the most powerful clans of jujutsu sorcerers, she had been an outcast in her own family for not being able to see curses. Despite being shunned by the clan, Maki proves them wrong by becoming one of the strongest combatants in the Jujutsu world.

Who doesn’t love pizza, right? Well, C.C. definitely does. The Immortal witch of the series, C.C., has the characteristic long lime green hair that makes her stand out. She’s a powerful beauty capable of bestowing Geass upon other beings.

Although she mostly comes off as distant and apathetic towards others and emotionless on the surface, she can sometimes be overly stubborn and selfish and is entirely unapologetic about it.

You know this lady to be a complete badass once you realize she’s the only female JoJo to be written. Jolyne is here to break all female stereotypes as she emerges like a polished diamond from the hardships thrown her way.

JoJo’s Bizarre Adventures boasts stylish character designs and an overall cool aesthetic, both of which Jolyne embodies to perfection. She has moss green hair in two braids wrapped to space buns with straight, face-length bangs. Apart from being a fierce fighter, Jolyne knows her way around the harsh world and is not afraid to get her hands dirty to survive.

It would indeed be blasphemous if the protagonist of the Shinichiro classic is not included in this list. This series changed the game in the industry with its jazzy vibe and the handsome, charisma incarnate that is Spike Spiegel. He has dark muddy green hair that is long and puffy, framing his ruggedly beautiful face.

A bounty hunter in the futuristic galaxy, this man exudes charm despite being indifferent and lazy and can easily be the coolest anime guy in the room. But like every memorable frontman, he has a past he learns to let go of.

If you’re someone who has grown up watching classic anime, you’d know Broly’s gonna make this list. Broly, the main antagonist in the Dragon Ball Z series, is deemed the most powerful Saiyan by Vegeta himself. This is backed up by the fact that, unlike most Saiyans who get yellow hair upon transformation, his legendary form turns his hair into the quintessential lime green that defines his iconic presence.

Starting as a relatively mellow guy, Broly eventually grows into the menacing character we have come to admire. And need I say more about how strong this man can be?

This handsome hunk just had to make the list among the top 3. The strongest member of the Straw Hat Pirates led by Monkey D Luffy, Zoro is definitely up there with the classics. A retired bounty hunter with impeccable swordsmanship feared by all, he is one of the most easily identifiable anime characters with green hair.

A long buzz-cut green hair and statement facial scar make him look the part of a badass anime guy. Zoro is a super intimidating and distant guy with a serious disposition most of the time with an extremely short temper. He is, however, a man of honor with conviction and determination.

You’d be absolutely right to expect this guy to make it to number 1. Among the online anime community, Deku is often seen as the next-generation shonen icon, following the footsteps of Naruto, Ichigo, and Goku, which is saying a lot. His name represents his iconic green character design, including his hair, eyes, and hero suit.

Izuku Midoriya or Deku has dark green hair with tight waves, which has now become an iconic look. Midoriya is a shy and submissive kid born quirk-less in a world where having power or a quirk has become a generic thing.

The series follows Midoriya and his quest to become the number one hero after he inherits the One for All power from his idol, the veteran hero All Might. Like a typical shonen protagonist, we witness Midoriya overcome his shortcomings through his power of will and sheer hard work, serving as an inspiration.

Although they weren’t included in the ranks, here are some green-haired personas who deserve no less attention.

There you have it, guys. 20 anime people with green-haired who are all badass in their unique way despite the rankings. If you think someone is missing from the list, please let us know; your opinions are always welcome.

Thank you for reading, and if you want freshly curated content about anime, please don’t forget to visit averagebeing.com.

20 Honest Reasons Why You Should Watch Anime (Explained)

20 Best Mystery Anime That’ll Keep You On Your Toes

25 Superheroes Who Can Teleport You With Ease