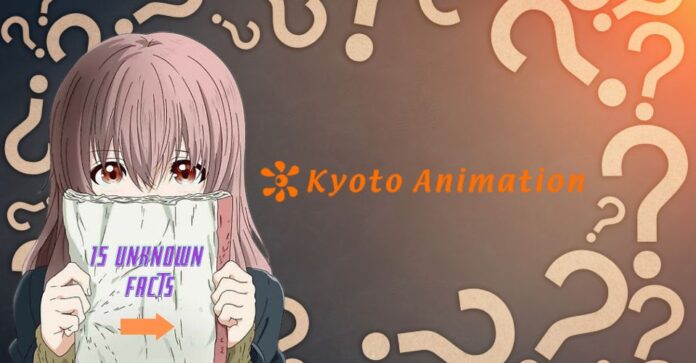 Kyoto Animation – A reliable name to bet your time on.

If the name of the anime studio sounds elite and elegant to you, then you have experienced the wonders of KyoAni works.

Be it the dramatic Clannad, hilarious Lucky Star, musical Sound Euphonium, tails of Miss Kobayashi’s Dragon Maid, or the under-appreciated archery anime Tsurune, Kyoto Animation has showered us with meaningful stories that remain with us forever.

There are many things about Kyoto Animation that you already know, but there are things you might learn for the first time. And I am here to share those facts with you.

What Makes Kyoto Animation So Special?

And their quality of work throughout the years is proof of that.

#15 THE TALENT OF HOUSEWIVES

Yoko Hatta, a painter at Mushi Production, left the studio after marrying Hideaki Hatta and moved to Kyoto. There, she gathered a few neighborhood housewives with free time and painted cels for the established studios under the label of Kyoto Anime Studio. And soon, these housewives became the foundation of the studio.

In 1985, Yoko Hatta established an actual company named Kyoto Animation. It was until a decade and a half later, in 2003, that Kyoto Animation produced their first TV anime, Full Metal Panic? Fumoffu.

Though Hideaki Hatta became the president, Yoko Hatta made sure to keep herself as head of operations. And to this day, she has the final say in anime projects.

#13 ONE OF THE MOST RELIABLE OUTSOURCING STUDIO

The word outsourcing has garnered a ton of negative attention due to the majority of outsourced work hampering the quality in recent times.

However, in its early days, Kyoto Animation was unrivaled due to its exceptional outsourcing capabilities, both in quality and quantity.

KyoAni outsourced to several established studios during the late 90s and early 2000s. But their most notable work is the 33 outsourced episodes of Inuyasha that got entirely produced at Kyoto Animation, besides fulfilling other roles in that series.

#12 KEY IS KYOANI’S KEY TO SUCCESS

Key is a Japanese visual novel studio known for its inspiring works to date. Thanks to Tatsuya Ishihara’s love for Key visual novels, and his determination to adapt them, Kyoto Animation delivered anime like Air, Kanon, and Clannad.

Not only did these anime make a name for themselves, but these adaptations also helped Kyoto Animation to earn the status as one of the best studios in the industry.

Baja no Studio (2017) and Baja no Studio: Baja no Mita Umi (2020), based on Kyoto Animation’s mascot character Baja, are two OVAs having a runtime of more than 20 minutes.

The tickets for the fan events held by Kyoto Animation and Animation DO include these OVAs on Blu-ray Disc. These tickets included an art book, commentary book, and booklet that cost around 12,000 yen (88.91 USD).

Training aspiring animators is one of Kyoto Animation’s initiatives that became so successful that other studios followed its footsteps but could not replicate the results. Some even closed down their training programs after a short period.

Kyoto Animation gave the trainees an option to become an employee after taking a test. And many of them did stay, considering the cost of living and the studio’s work environment. The joining of these trainees resulted in the strong foundation and rise of in-house talent in Kyoto Animation.

On average, a KyoAni employee stays at the studio for more than a decade, which is why you can enjoy the consistent style and trademark quality of Kyoto Animation throughout the decades.

The one thing Kyoto Animation made evident since its arrival is its strong belief in quality over quantity.

Most modern-day studios produce at least 6 to 8 TV series in a year, sometimes more than that, considering the rise in co-productions these days.

Kyoto Animation produces 3 TV series in a year at maximum staying true to their belief. And that is also the reason why you get to see the never-forgetting wonders on screen.

The arson attack in July 2019 scarred many of Kyoto Animation’s staff, who lost their colleagues in the attack. A scar that still pains years after the incident. Out of 70 animators working in the studio on that day in July 2019, 36 died while 33 others got severely injured.

Only one question arises, how safe are anime studios in terms of security three years after the incident? Did they learn their lesson, or are they still lax in the security department?

The arsonist Shinji Aoba, who set fire to the Fushimi studio of Kyoto Animation, claimed that KyoAni copied a scene from his novel without compensating him. According to reports by Kyoto Shimbun, the arsonist claimed it to the officials, saying, “The thing Kyoto Animation copied from me was the scene in Tsurune where the main characters buy discounted meat.”

The scene belonged to Episode 5 of Tsurune.

Kyoto Animation later confirmed that though they had received the submission for evaluation, it was removed from the award consideration from the first round as it didn’t have the factor Kyoto Animation wanted.

Kyoto Animation faced many challenges following the tragic incident, and several veterans leaving the studio is one of them.

Among them, the most noticeable one who left KyoAni is Naoko Yamada, a veteran who participated in every KyoAni work. She directed A Silent Voice, Liz and the Blue Bird, the K-On TV series & the movie Tamako Market, and Tamako Love Story while participating in other KyoAni shows in different roles.

She later joined Science Saru to direct Heike Monogatari in 2021, which was critically acclaimed. Her upcoming work is a movie titled Garden of Remembrance, which got announced at the Annecy International Animation Film Festival in 2022.

Naoko Yamada is directing Garden of Remembrance at Science Saru. The movie will premiere in 2023.

Besides many aces leaving the studio, the young and upcoming talents with the remaining veterans of Kyoto Animation took the helm. They delivered the expected quality from Kyoto Animation despite the tragedy and obstacles they had to overcome.

During the worst of times, after being hit by an arson attack followed by the pandemic, Kyoto Animation delivered each episode of Miss Kobayashi’s Dragon Maid S with less than 7 Key Animators and a single animation director.

In comparison, other seasonals took 33 Key Animators and 9 Animation Directors to complete each episode on average.

This entire season of Miss Kobayashi’s Dragon Maid S got completed with only 35 different animators. While the result might be better than its prequel but this was one of the most challenging productions for Kyoto Animation.

Their roots are strong enough to overcome this wild storm.

And it is more than relevant in recent years, where a production failure is a daily event.

Whether the demise of the series director Yasuhiro Takemoto in the arson attack or the loss of pre-production materials in that fire, Miss Kobayashi’s Dragon Maid S production would be a mess.

If not for the delay, and the studio veteran Tatsuya Ishihara taking the lead, Miss Kobayashi’s Dragon Maid S could have turned into a disaster.

Thanks to properly managing the disastrous situation, Miss Kobayashi’s Dragon Maid S shines more brightly than its predecessor, and its production ended months before the airing.

To give you a clear idea, a couple of former KyoAni animators worked on SK8 the Infinity and Kemono Jihen after finishing their work on Miss Kobayashi’s Dragon Maid S.

SK8 the Infinity and Kemono Jihen were released in January 2021, while Miss Kobayashi’s Dragon Maid S was released in July 2021.

Besides being hit by the unfortunate arson attack in 2019, Kyoto Animation and Animation DO’s total loss of 28 million yen (260,000 USD) in 2020 might have resulted in this decision.

Like every other major animation studio, Kyoto Animation also pays an average salary of 200,000 yen per month to new hires.

Then how is it different than any other studio?

While most major studios are in Tokyo, Kyoto Animation is in Kyoto. Compared to Tokyo, the affordable cost of living and 30% to 50% cheaper house rents make Kyoto a better place for budding animators to survive.

While most of the other studios hardly reward their animators post the success of a show, Kyoto Animation found a way to change that.

They sell these novels through KyoAni’s online store, which means they don’t have to go through the complications of going through several publishers to adopt a manga or light novel.

With this, they can reward the creators when a title becomes successful. They can make more money by merchandising goods and selling them to local and international fans through their online shop.

But this meant cutting ties with the well-renowned publishers. But Kyoto Animation’s strong belief in their idea has been successful thus far, for example, the sports anime franchise Free, which has multiple seasons and movies.

Most of the anime in Kyoto Animation’s portfolio works in recent times are adapted from their Light Novel Label, KA Esuma Bunko.

The latest light novel to get an anime adaptation announcement by Kyoto Animation is 20th Century Electricity Catalog.

Kyoto Animation has hundreds of anime if all the specials, OVAs, are included, but it would become too long to scroll. That’s why I have created a separate table for each series.

For your convenience, you can also follow the table as a watch order, as I have included the prequels and sequels relevant to the main storyline. The exception is Fullmetal Panic, as KyoAni has worked on a side-story and the second season for the particular series.

Other KyoAni works that are worth your time.

Yes, Kyoto Animation is still active and has no sign of shutting down in the future. Overcoming the obstacles like the arson attack and pandemic, Kyoto Animation released several movies and a TV series sequel.

How Much Does Kyoto Animation Pay Their Animators?

Kyoto Animation is the studio that animated Violet Evergarden.

If KyoAni had to steal anything, why would they steal the most generic scene in anime history? The main characters buying meat is part of any anime with the elements of slice of life.

What Is the Best Anime Studio?

With that, I conclude this article on 15 things you should know about Kyoto Animation. Honestly, this article took a lot of research, and shout out to Sakugabooru for their detailed analysis of Kyoto Animation, which made it easier for me to deliver some of the amazing facts in this article.

If you have suggestions, recommendations, or feedback regarding this article, feel free to reach out on averagebeing’s Instagram handle. 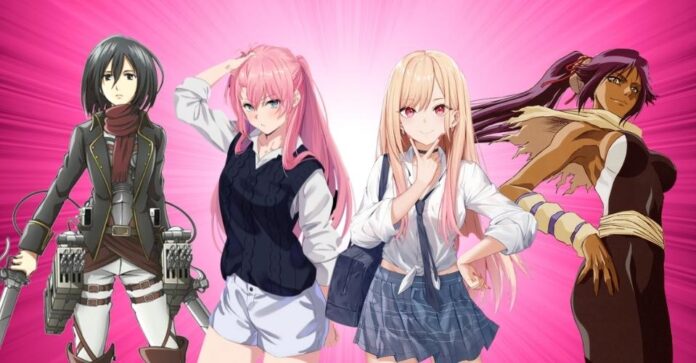