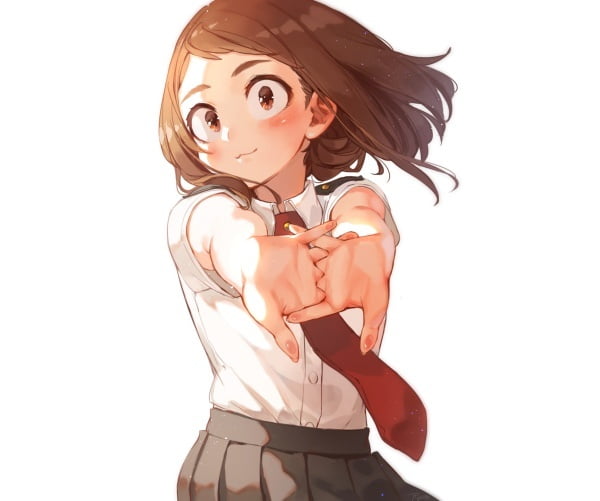 The anime’s fifth season began with a brand new set of opening and ending themes. This teased what we can expect from the next half of the season.

The new themes featured a first look at major villains, as well as the first glimpse at the future transformations of the young heroes under the guidance and supervision of the senior heroes.

The first glimpse at new costumes was given for heroes such as Ochaco Uraraka. While the first glance seemed to hint that she would be making adjustments in her hero gear, it wasn’t clear what these changes would be.

The season’s newest episode has changed that. We now know for sure that it is a new suit, and we also get to see how the new gear will affect her fighting style.

Episode 104 is an anime story about Ochaco Uraraka’s and Tsuyua’s time with Ryukyu.

Ochaco confirms that she ordered a new costume. She laughably avoids explaining that she changed her costume because of what happened to Izuku Midoriya’s Blackwhip after the joint training exercise with Class 1B.

The wire she uses to cross over areas is much easier thanks to her gauntlets, which now shoot out from her gauntlets.

Uraracha can now use her floating ability and fly through the air much like Ryukyu, the pro-hero Ryukyu she is working under. This is all to better assist those in mid-air, like Izuku.

Though we’ve seen few glimpses at what’s coming, These improvements will be more evident in future episodes.

What do you think about Ochaco Uraraka’s new hero costume? What other heroes do you think would benefit from having their costumes updated or redesigned in the future of My Hero Academia?

Do you think it’ll be more on the defensive front or on the offensive?

Smash the share button below to your MHA friends in whatever social media platform they’re in. For more amazing details on your favorite anime shows and characters, Join the community by signing up for our free newsletter.