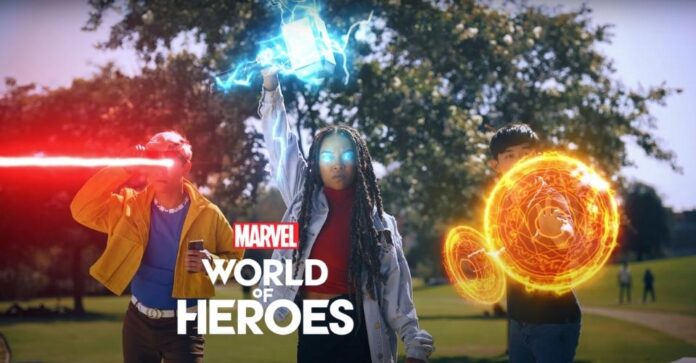 MARVEL fans, fasten your seatbelts. It’s time for one hell of a ride! At the D23 Expo held this year, the Disney & Marvel Games showcase unveiled the collaborative venture involving Marvel Entertainment and Niantic. An augmented reality (AR) game titled MARVEL World of Heroes is scheduled to be released next year.

This game will allow players from across the globe to customize their very own “Super Hero identity” and band together with their favorite Marvel characters out in the real world. The global launch will indeed become a phenomenal hit replicating the success of Pokemon Go if the writers and developers put their heart and soul into the project.

Check out the official video announcement video of MARVEL World of Heroes:

In the clip, we see three individuals living the typical Gen Z life when suddenly a portal opens up in the sky, and they are forced to use their powers to battle against evil. As it pans out, we get to witness abilities akin to those of Thor, Doctor Strange, and Cyclops of X-Men wielded by the three in the video. Not to mention, You can feast your eyes on scores of others using their powers to fight against menaces. The video ends with the message, “WE ARE ALL HEROES.”

Their maiden Augmented Reality game, Ingress, was first released on Android near the end of 2012. A public release ensued in October 2013, followed by an iOS version in July 2014. Ingress Prime was a revamped version of the game mentioned above unleashed in November 2018. Ingress also received an anime adaptation that has been streaming on Netflix since 2019 and was produced by Studio Craftar.

After this arrived, Pokemon Go was developed in collaboration with Nintendo and The Pokemon Company. The highly-anticipated game got released in 2016 on Android and iOS platforms. It has taken the world by storm and continues to be in the news even after four years. Within a month of its release, Pokemon Go was downloaded more than 100 million times, and Niantic, Inc. has been a popular developer ever since.

Established via the merger of Marvel Entertainment Group and Toy Biz, this company operates as a subsidiary of The Walt Disney Company. It is primarily known for the tremendous advancements in the superhero film genre and comics and has produced shows such as Luke Cage, Jessica Jones, Agents of Shield, and The Punisher, as well as live-action films like Logan, Deadpool, Venom: Let There Be Carnage and many more.

Are you hyped about this move? What do you think will happen at the end? Will this game succeed, or are you skeptical about this due to Niantic’s inability to deliver the Transformers: Heavy Metal AR mobile game? Let us know your thoughts down below.

Previous articleTONIKAWA: Over The Moon For You Reveals New Special & Music Video
Next articleFreiren: Beyond Journey’s End Anime Will Grace Our Screens Soon

15 Best ISTP Anime Characters You Need To Know About