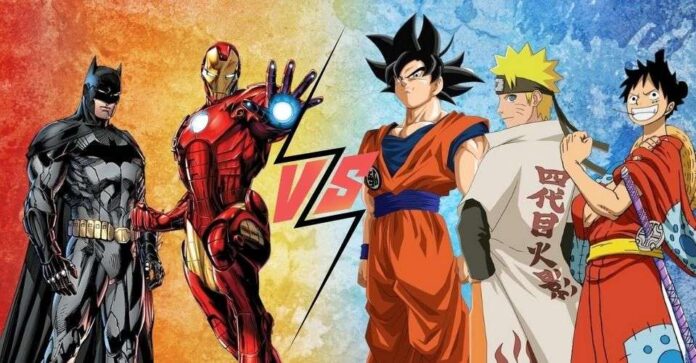 What happens when we put Marvel, DC and Anime in a fight?

Three of our favorite universes, Anime, DC, and Marvel, have given us many superheroes since all of our childhood. They have cranked the entertainment industry to a whole new level, are a huge cultural influence, and will continue to be so for years.

There have been many fan-favorite battles between these universes going on for ages. From Superman vs. Goku to Omnipotence vs. Celestials, we have pondered and only imagined how these fights could have turned out.

Today we will dig deeper and see what would happen if anime had to take on Marvel & DC and look at the five reasons why anime wins and why DC & Marvel takes it too.

So, let’s just get down to it, Can Marvel, DC Really Beat Anime In An All-Out War?

Who does not love a speedster? If only we could finish our work or homework as quickly as these superheroes run. There are many superheroes both in Anime and in DC & Marvel world. They will put any fastest moving object known to us at shame. The quickest superhero in Marvel & DC universe is a long debatable one. For some, it is Flash or Wally West, and for some, it is Spectrum or Quicksilver. But are they fast enough to outrun characters from anime?

Flash has to be the fastest among all DC, Marvel & Anime characters. Over the years, Flash has achieved speed feats that would prove impossible for many. His speed force is far more commendable than any hero’s speed.

Flash can perceive events while running faster than at speeds of less than an Attosecond. That is 0,000,000,000,000,000,001 (stop counting the zeroes now). In layman’s language, a light would not even move from one end of the molecule to the other in an attosecond. And Flash is believed to perceive things that are LESS than an attosecond. So, our speedster snatches this category.

What is better than heroes wielding deadly swords to take down their foes? So, in this section, we will take two of the most formidable characters with swords from DC & Marvel and Anime: Blade, aka Eric Brooks, and Dracule Mihawk from One Piece. On the one hand, we have a half-vampire with superhuman strength, agility, healing, and stamina. In the other corner of the ring is the Strongest Swordsman in One Piece history.

Mihawk has this round in his pocket. He is not only the “Strongest Swordman in the World” but also the strongest compared to DC & Marvel Universe characters. Though Blade has superhuman healing ability, strength, agility, and speed, Mihawk can one-up him. Mihawk has exceptional eyesight and can keep up with every move Blade makes, and with his Busoshoku and Kenbunshoku Haki, it’s game over for Blade. And also, Mihawk’s sword, Yoru, is strong enough to cut Blade’s sword into two pieces.

The term “superhero” typically depicts hulky individuals capable of incredible feats, like Superman, Thor, Captain Marvel, Flash, or Hulk. Strength is only one criterion by which superheroes are evaluated. The other and most often ignored criterion is intelligence. Think about it, from Wakanda’s Technology to Batman’s Bat-Mobile to the world’s most advanced technology. It could not have happened without the genius minds behind it.

So, who is the “smartest” among the bunch?

Reed Richards from the Fantastic Four is probably the smartest among all the DC & Marvel universes. One of his incredible feats, among many, is that he designed the unique Baxter Building. From anime, we have Light Yagami from the fan-favorite Death Note. Based on the IQ Levels, Reed is placed at 267 and stated as “Level Twelve Intellect” by none other than Tony Stark. Whereas, Light IQ is somewhere in 210-220 range. Marvel & DC take this round home.

Disclaimer: We are not considering One Above All for this section.

If you think Thanos snapping his fingers would wipe out half of the world’s population, wait till you meet Goku. Whether Captain Marvel or Superman, Goku can take on both and win.

Goku is strong enough to destroy the universe itself. Time and again, he has proven his might. Even as a Kid, Goku was powerful enough to take on an entire army. Unlike Superman’s Kryptonite, Goku has no weakness, apart from holding back from using his full potential during a battle. Only Kryptonite can bring Superman down, but Goku rivals him in terms of fighting ability and durability, and Superman will probably just tire himself out. And after all, Goku is Saiyan God. If he cannot rival Superman, who will?

Teamwork makes the dream work. A foe may be too formidable for a single hero to bring down; that is where teamwork comes in. Whether they are heroes or villains, some of the Marvels, DC, and anime require even the most deadly characters to collaborate. There is no denying that anime greatly emphasizes teamwork, from players coming together in Haikyuu to Ninjas taking down their foe in Naruto.

Now, this may raise some eyebrows, but when it comes to the most iconic group or collaboration of superheroes, Justice League, X-Men, and Avengers probably surpass all. The fanbase Avengers and Justice Leagues have amassed over the years is simply phenomenal. And solely on that basis, this round goes to the fearsome teams coming from DC and Marvel.

Manga, anime, Marvel, and the DC universe has been in the entertainment industry for decades; they all have garnered thousands of characters throughout the years, from Marvel’s first superhero Human Torch to the newest character created by DC’s Miracle Molly.

However, Marvel & DC characters mainly revolve around them being superheroes or having superhuman-like strength. Anime has a much deeper storyline and genre, with heroes for every occasion. For instance, anime has MCs like Kurosaki Ichigo, a Soul Reaper; Edward Elric, an Alchemist; and Satan, who is running a fast-food joint to make ends meet. Anime probably has a hero for every occasion and every kind, which is why this round goes to anime.

Not all heroes are from planet earth, some hail from far away cosmos. It is cool enough to be a superhero, but being an alien is just out of the world. What is the first superhero that comes to mind when talking about aliens? Probably Superman or Dragon Ball. Well, that’s the case. The alien characters in anime are somewhat limited, whether the Saiyans from Dragon Ball or Boros from One Punch Man.

However, that is not the case when it comes to Marvel or DC; the comics thrived on the unknownness of the cosmos. Many superheroes and villains are extraterrestrial beings, like Silver Surfer, Martian Manhunter, The Legion of Superheroes, and Starfire, among countless others. There is something to space and galaxies that will pique anyone’s curiosity; this round goes to the planets of DC and Marvel.

It is not an easy task to get to a stage to beat villains and also keep one’s sanity and moral compass intact. A mentor goes a long way in shaping heroes as we know them today, from Alferd Pennyworth keeping Bruce Wayne from going astray to Professor Xavier shaping the Mutants of tomorrow; a mentor plays a vital role in a hero’s journey. In the end, who are we if it were not for the people who guided us all throughout?

There are many mentor figures in DC and Marvel, but they cannot come close to what anime has. The mentors of anime are in a class of their own, and most animes have a mentor or teacher guiding, training, and helping the MC reach his ultimate goal.

Without Jiraiya, Naruto probably would have never mastered the classic Rasengan technique, and All Might is a solid textbook mentor. Even after being on the verge of absolute despair, he sets himself as a prime example for not only Deku but all the students. The awe-inspiring mentors of anime take this round home.

This is a tricky one and probably the section which can go in any two directions. There are god-like characters in all three universes. Some are as powerful as a god, and some are actually a god. Marvel, DC, and Anime all have omnipresent beings, making it even more difficult for an all-out war.

But, this round tilts more towards the Marvel & DC universe due to their supreme beings. One, in particular, takes the biggest piece of the cake, the One Above All. He is omnipresent, omnipotent, and omniscient, meaning he cannot be defeated. However, very little is known about Kami Tenchi, and if there is a crossroad where a battle takes place between the two, it will result in a stalemate. But apart from that, One Above All is literally above all other characters in terms of power.

Superheroes are humans with superhuman powers, but what happens if you take their power away? What does it make them? You still get a superhero. From Iron Man to Batman to Captain America, they all have no real power attributed to them. What makes them a hero is their immense physical strength or their suit. They may not be powerful enough to take beings with godlike strength, but they are intelligent enough to outsmart them in a battle.

Rogers is not only a formidable pirate with immense strength and Haki but also a leader who led one of the most feared crews across the seas. With his Haki, he becomes invincible to any outside threat, mainly Marvel & DC heroes in this case. The Pirate King takes this round.

With so many anime characters showing up, This is getting kinda hard for the superheroes but as of now, Marvel, and DC can beat anime in an all-out fight with the help of characters like The One Above All, and The Presence who are just literal writers of the comic worlds. Again, This is not by a huge margin but these superbeings have what it takes to tilt the outcome of the fight.

So, What do you think about the ever-green comics vs. anime debate? Let us know it all in the comments below and do visit averagebeing.com for more awesome content. 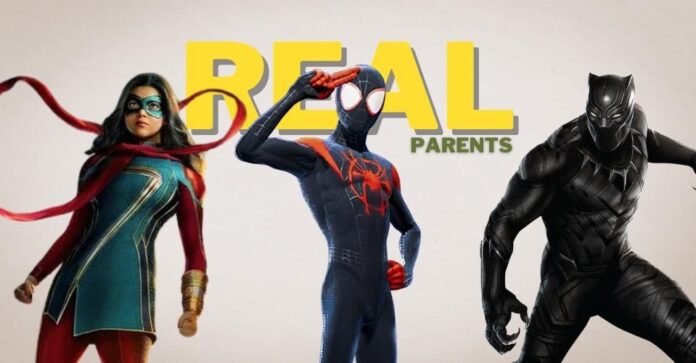 20 Superheroes Who Have Living Parents (Ranked)
Next article 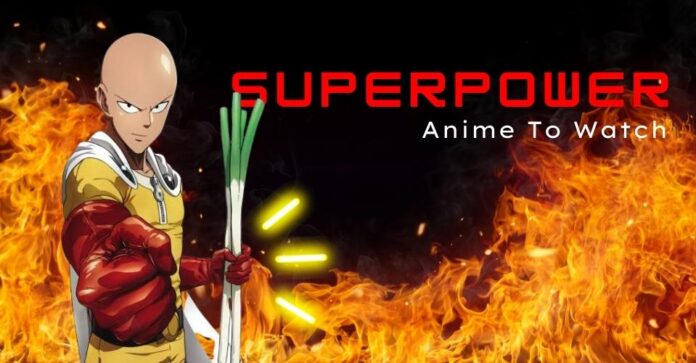